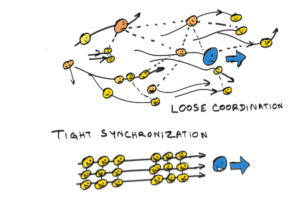 As I am building The Scaleup Project, I’m struggling with the reality that TSP is more than a business.

I guess it’s my ego which imagines me wearing Colonel slipons as the CEO of a tightly disciplined team, each one saluting me with a jaunty “Yes, Sir!” at my every instruction.

But this 1960’s view of business cannot work as we warp-speed towards the 2020s. I’m dealing with a group of talented adults, each offering a unique experience and skill set. People float in and out of the team according to their needs, our needs and the needs of the entrepreneurs we serve. They are as busy making their impact in the world as I am in making mine.

During my EMBA I applied four times to senior management positions related to entrepreneurship or economic development. I know I brought a fantastic life experience to each organization. I wanted to throw my whole self into each project, to make a difference and leave a legacy.  But at each interview I felt as if I had to leave part of me at the door to fit into the job requirement. I was a round peg that could not fit into a square hole. And interestingly enough, three of those four organizations disappeared within a year…

If I don’t fit into an org chart, why am I trying to build one for my own venture?

This is not a trivial concern. It leads to a whole list of questions about how to design this community:

I’m concerned about encoding too much structure at this early stage because I know that as we scale from preparation to beachhead, there are many unknowns unknowns which will pop up.

The value of desynchronization in time and space

10/ Humans are of very low value as cogs in a machine doing identical things in interchangeable ways, on the same clock, on the basis of identical kinds of training to graded levels. That’s for robots.

11/ Humans are most valuable when they have high autonomy, and able to play to their unique strengths and histories, particular sensitivities, op-tempos, and patterns of privileged information

12/ The idea of “wisdom of the crowds” in fact rests on humans having diverse, unique private knowledge bases (foxy!). The madness of crowds kicks in with synchronization and imitation (hedgehoggy!)

13/ Why desynchronize in space? If you are marching in a straight line on a road, and your buddy is clambering over rooftops roughly parallel to you, should he try to move in strictly parallel ways? That would be dumb.

14/ Why desynchronize in time? Different kinds of work have different time constants and generate actionable information at different tempos. Different people are in different emotional states at the same clock time.

Instead of synchronization, use focused (what he calls “laser-beam”) coordination only when the situation demands it. Laser-beam coordination is expensive in energy and lost opportunity. It is most useful to use when dealing with an urgent issue.

Premature Synchronization is the Root of All Evil